The present blog pertains to the landmark fight over Monsanto’s Bt. Cotton technology. It is not yet finalised whether the subject invention was a patentable subject matter or a plant variety, but the term of 20 years has expired. At the outset, I must clarify that the conflict is still pending before the High Court vide Supreme Court’s order in 2019 and there is no development yet; yes, “no development”, this is what uneases me. That said, fighting over an issue in courts even after the death of a victim or dissolution of any other legal entity is common in India and the same is happening with intellectual property.

Why I continue to gaze at this dispute is not due to my impatience for wanting to witness the end to a long-awaited decision on plant variety versus patent. But the Supreme Court’s order which uses words like “cooperate”, “facilitate” and “early disposal” used on January 8, 2019 (excerpt below) make me wonder how seriously the suggestions of the Supreme Court are implemented by the parties and the lower court – if the court itself tends to request the parties than order them. This is especially important when you consider that, IPR cases mostly hold importance until IP is alive. [Defendant opposes the plaintiff’s request to rescheduling the date reminding that the Supreme Court has directed expeditious hearing] 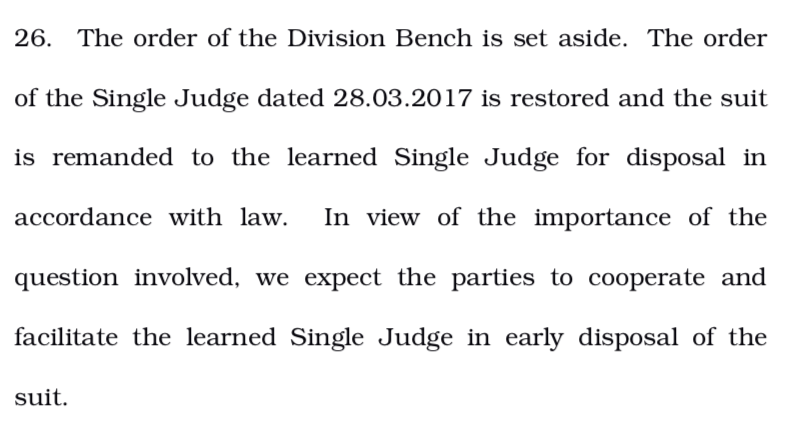 The conflict started in 2016 when Monsanto Technology LLC., filed a suit against Nuziveedu Seeds Ltd. for trademark infringement (“BOLGARD” and “BOLGARD II”), patent infringement (Patent no. 214436) and seeking to prevent the defendants from selling and using the seeds obtained from patented technology.

Before we dive into the legality of the issues in the present matter, let’s spend a minute to understand what transpired a planted collaboration of more than a decade between the parties to a dispute uprooting the consensus of the parties, just some years before the end of the Monsanto’s patent.
Monsanto filed the Indian patent application in 2001 claiming priority from a US application. The claims of the patent were related to a method of producing transgenic plant and a nucleic acid sequence thereof. To use the patented technology, Nuziveedu seeds entered into a sub-licensing agreement for 10 years. The patented technology enabled the defendant to develop genetically modified hybrid cotton planting seeds (bt. cotton). The term of the agreement was eventually extended, and thereafter, a dispute on the payment of royalty arose that prompted Monsanto to terminate the agreement in 2015. Payment of royalty is in itself another chapter of conflict between the farmers and Monsanto. For the present case, it is sufficient to understand that the defendants asked Monsanto to comply with the royalty rate in accordance to the price control regime introduced by the State to promote the interest of farmers. [Order is accessible here].

Following the failed negotiations, Monsanto filed a suit for the IP enforcement against Nuziveedu before the High Court of Delhi. The defendants filed a reply broadly on the following points:
a. A counter-claim seeking revocation of the patent under Section 64 of the patents act directing to Section 3(j) of the act;
b. Attempt to take shelter for using the patented technology without licensing under the Protection of Plant Varieties and Farmers Right’ Act (PPVFR), 2001; and
c. Enunciate the differences between the technology used by them and the patent.

The Single Judge decided the plea of interim injunction on the above-disputed matter on March 28, 2017, while the validity of the patent was left to be decided for a later stage, as it also involves a matter of expert advice. The interim order appeared well-balanced on both the sides, like:
Favouring Monsanto: The parties should stay bound by the obligations asserted under the sub-licensing agreements, as is before the termination until the suit is decided.
Favouring Defendants: The licensing fee/trait value to be paid shall be governed by the laws in force, i.e., the price control regime of 2015.
However, such well-balanced interim orders are not usually swallowed in the litigation world and thus, both the parties expectedly filed an appeal against the order.

The uncalled twist in the proceedings was seen when the division bench of the High court rejected Monsanto’s appeal by accepting the counter-claim of the defendant, i.e, the patent was rejected for not being an invention under Section 3(j). The other elements of the suit, namely, the claim of damages and other reliefs, were left to continue until the final disposal of the suit.

Aggrieved by the order of the division bench of the High Court, Monsanto echoed the words of the Single Judge (High Court) before the Supreme Court that the issue of revocation cannot be adjudicated without the expert’s opinion and the revocation of the patent was not the subject matter of appeal filed before the Division Bench. Also, Monsanto argued on the technical reasoning to prove that the invention does not fall under Section 3(j). Particularly, Monsanto argued that the patented matter was a gene, which cannot be a subject matter of protection under the PPVFR Act in light of Section 2(za) read with Section 14 and 15 – a gene cannot be a specie of a plant. Also, the chemical product NAS was a man-made DNA to be inserted into cotton plants to provide them with a specific trait of insect tolerance.

In the course of the trial, Monsanto agreed to abide by the trait value/license fee fixed in accordance to the statutory price regime for the sub-licensing agreement and not to file patent infringement case against any farmers.

On the other side, the defendants put forward the arguments to prove that claims 1 to 27 are not invention under Section 3(j) for being parts of a plant and essentially biological processes.

After hearing the arguments, the Supreme Court decided that the division bench of the High court has legally erred in summarily adjudicating the technically complex issue of the patent validity at the interim stage, while it ought to have confined only to the adjudication on the validity of the Single Judge’s order on the interim injunction. Accordingly, the order of the division bench of the high court was set aside and the matter was remanded back to the court of Single Judge. Thus, the heavily bidirectional argued question of whether the patented DNA sequence of bt. cotton was a plant or part of a plant or not under Section 3(j), or if it would be protected under PPVFR is left to be determined at the final hearing of the suit.

The initiation of this case raised a lot of hope in the IP community on receiving some clarification on the clash of plant variety and patent law. However, given the slowness of the courts in India, it appears that the matter will take another decade for a final hearing. Nevertheless, the expired patent is not of much importance to any patent holder. Let us see how the proceedings are taken forward in future and the judgement coming out of it should set a definite law to end the fight between patents and plant variety.

This is the second instance reported by us on the inconsideration of the time-bound importance of IP issues by the Indian courts. [previous post].

About Krishnam Goyal 17 Articles
Krishnam is an LL.M. student at Munich Intellectual Property Law Center (MIPLC), Germany. He is an engineer, advocate and a patent agent in India. He holds around three years of working experience in the field of patent drafting and prosecution in the fields of ICT, electronics, computer-implemented inventions, mechanical engineering and green technology. The area of research that interests him is patenting of AI, SEPs, Green technology and climate change issues

The IP Press is a team of IP-Holics, who started this blog to ensure access to the latest intellectual property (IP) issues for all the IP hopefuls. Our focus would be to address IP concerns of stakeholders, students, academicians, researchers, start-ups, etc. and guide them to attain, enforce and be aware of their IP rights.